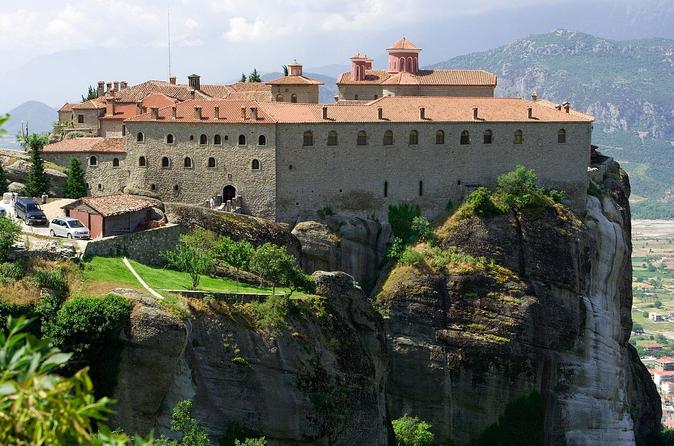 Private tour up to 4 person. The trip duration is up to 12hrs. Departure from Thessaloniki at 08:00 and return back at 18:00. We will visit  Meteora rocks and two monasteries. Later free time in Kalambaka for lunch and return to Thessaloniki in the evening

At 08:00 pick up from your hotel and we drive to  Meteora, for a a visiting tour of some of the most spectacular monasteries of the Orthodox faith, built on top of pure line stone pillars .

A trip to Meteora offers the unique experience of nature’s grandeur in conjunction with history, architecture and man’s everlasting desire to connect with the Divine. From the early Christian times, the Meteora vertical cliffs were regarded as the perfect place to achieve absolute isolation, to discover peace and harmony and, thus, to support man’s eternal struggle for spiritual elevation.

Meteora is a truly inspiring and sensational setting of overwhelming rock formations, but one must also be prepared to expect that this trip is much more than merely visiting an exquisite landscape. It is a pilgrimage to a holy place for all Christians around the world. Meteora has become a preservation ark for the 2000-year-old Christian Orthodox creed.

The gigantic rocks of Meteora are perched above the town of Kalambaka, at a maximum height of 400 m (1200 ft). The most interesting summits are decorated with historical monasteries, included in the World Heritage List of Unesco. Only 6 of them have made it through the centuries, from an initial estimated number of 24. Mostly dating to the 14th and until the 16th century, these monasteries were built by monks who were previously hermits in the area, living in individual caves. Once united, these monks took months and years to carry the construction material to the top of rocks, using ropes, folding ladders, nets and baskets, and with much determination.
They then proceeded to build monasteries that deserve everybody’s awe. The monasteries had no access to electricity and water until recently and the monks and nuns have been long trained in obtaining efficiency. Visit the monasteries, even if your interests are not deeply religious. It is the only way to enrich your feelings of spirituality that this area already exudes, no matter how long or brief your sojourn in our beautiful land.

We will visit two of the monasteries. Later we will stop in Kalambaka for lunch and free time. Return in Thessaloniki about 18:00.

Private tour up to 4 person. The trip duration is up to 12hrs. Departure from Thessaloniki at 08:00 and return back at 18:00. We will visit  Meteora rocks and two monasteries. Later free time in Kalambaka for lunch and return to Thessaloniki in the evening