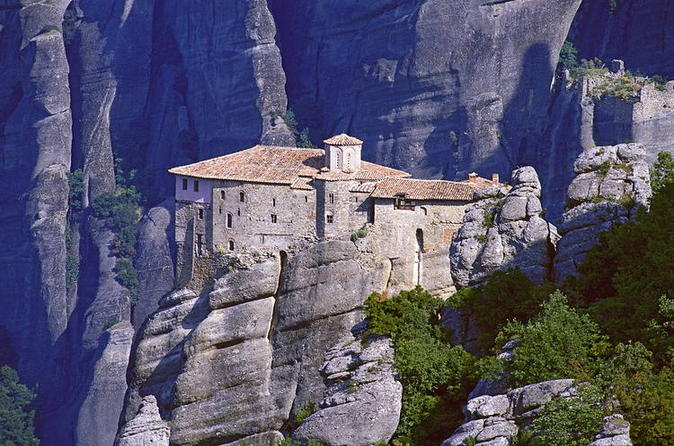 The Metéora is one of the largest and most important complexes of Greek Orthodox monasteries in Greece, second only to Mount Athos.

Meteora is an area in Thessaly (Central Greece) under the rock towers of Meteora (258 km distance from Thessaloniki). The thing that makes Meteora so special is the monasteries on the top of the rock towers. The monasteries, the amount of peaks to climb and the paths for hiking brings in Meteora the whole year many tourists. 'Suspended in the air' (the meaning of Meteora in Greek), these monasteries represent a unique artistic achievement and are one of the most powerful examples of the architectural transformation of a site into a place of retreat, meditation and prayer. The Meteora provide an outstanding example of the types of monastic construction which illustrate a significant stage in history, that of the 14th and 15th centuries when the eremite ideals of early Christianity were restored to a place of honour by monastic communities, both in the Western world (in Tuscany, for example) and in the Orthodox Church.The route from the Thessaloniki to Meteora takes about three hours. There we will visit 2-4 monasteries and then we can have lunch in the village Kastraki located in the area or you may visit the town of Kalambaka.  The program is free and can be configured to customer's wishes. Duration 11 hours (Lunch option max 1hr)

The Metéora is one of the largest and most important complexes of Greek Orthodox monasteries in Greece, second only to Mount Athos.